What is three-dimensional printing all about and what path has it taken up to the present day? What transformative capability does this technology have for productive processes, for the relationship of the individual with objects and for society in general? What types of printed objects can we find right now and in what fields are they used? What is the limit of how far 3D printers can be used? 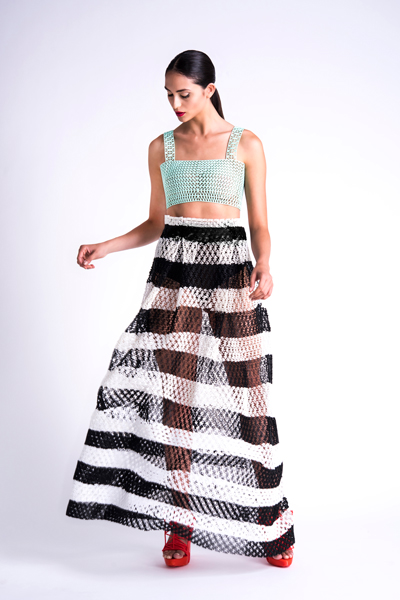 These and other issues will be addressed in 3D. Printing the World, an exhibition curated by the architects and designers Carmen Baselga and Héctor Serrano based on three-dimensional printing technology and its impact on disciplines as varied as medicine, fashion, gastronomy and architecture. A genuine transformation that allows any citizen to manufacture anything they like, reformulating basic concepts such as authorship, sustainability, education and accessibility.

The exhibition is organised into four broad thematic blocks: From bit to atom; Through the rear-view mirror; The three-dimensional footprint and The next step. The first gives a simple explanation of what 3D printing is all about, the types of printing, the variety of the materials used and the principles that guide this technology. The second block takes a look back in time to allow us to understand the origin and evolution of this technology up to the present day, highlighting the various landmarks achieved over the course of time: the companies involved, the economic worth of the industry, numbers of printers sold annually, etc. The third gives some examples of how the technology is applied across different fields and invites reflection on the phenomena from a variety of viewpoints. The last block puts forward, as an epilogue, predictions and expectations for the future of 3D printing.

In addition to objects, the show is rounded off with a series of visualisations and audiovisual pieces, noteworthy among which are interviews with professionals with profiles as diverse as bioengineering, design, philosophy, robotics and movement making. All this to provide the visitor with the broadest possible overview of a digital phenomenon considered by many to represent the next industrial revolution.

From bit to atom

‘If the end of the 20th century was about information becoming digital, the 21st century is going to be about bringing the virtual world into closer alignment with the physical one‘, Hod Lipson and Melba Kurman.

The bit is the basic unit of information used in information technology and the atom is its equivalent in the physical world. As the distance between the two reduces, we are eliminating the frontier between the digital and the physical. 3D printing is doing precisely that, translating what exists solely in the computer into material and vice-versa; which means a new way of understanding materialisation and manufacturing.

Through the rear-view mirror

The history of 3D printing is not as recent as it may appear. The first experiments with this method of manufacturing started at the end of the 1960s, although it was not until the mid-80s when they began to develop the technology as we know it today. The first commercial printer, the SLA-1 by 3D Systems, marked the beginning of additive manufacturing. During the first years it was only used for prototypes, but over the last decade it is being used to make finished products ready to use. At the same time we are witnessing the democratisation of the technology: 3D printers are increasingly more affordable and are entering the domestic sphere, which implies decentralisation of manufacturing and a (con)fusion between the consumer and the producer.

In the same way that mankind leaves behind traces and signals wherever it goes, 3D printing technology is having a strong impact on the economy and our society. This block, divided into different sections (New game, new rules; Learn by doing; Made to measure;  Make sustainable; New medium, new languages;  Productive changes;  Eating with printing), is dedicated to covering some of the most relevant ‘footprints’ detected up until now, showing some examples of how this technology is applied in different fields.

The last section puts forward, as an epilogue, predictions and expectations relating to the future of 3D printing. It highlights what MIT professor Skylar Tibbits presents as 4D printing that consists in programming physical objects and biological materials to change shape, properties and even to calculate in a material constructed of something other than silicone (with reference to chips).

Programme of workshops and visits

The exhibition 3D. Printing the World is accompanied by a programme of workshops prepared by our education team. There are workshops suitable for all ages and registration is free. Check here for all the details.

The exhibition ‘3D. Printing the World’, apart from the usual guided visits, will feature three special tours for which prior registration is required via the following email address actividades.espacio.fundaciontelefonica.com over the period of the exhibition, from 15 June to 22 October 2017. Check here for all the details.