This exhibition traces the life of the Russian scientist Lev Sergeyevich Termen and his inventions, concentrating on a particularly fascinating one, the theramin.

This exhibition traces the life of the Russian scientist Lev Sergeyevich Termen and his inventions, concentrating on a particularly fascinating one, the theramin.

The physicist and musician Lev Sergeyevich Termen (1986-1993), known in the West as Leon Theremin, invented the etherophone in 1919. This invention, which changed its name to that of its creator and is known popularly as the theremin, is considered to be the world’s first electronic instrument. This exhibition traces the life of the Russian scientist and his inventions but concentrates on the invention of the theremin.

It is located next to the permanent exhibition of the History of Telecommunications, which occupies the second floor of the Espacio Fundación Telefónica. It can be visited from 30 September 2016 to  2 April 2017.

León Theremin discovered his instrument while studying electromagnetic waves at the request of the Russian government. He was researching motion detection using the waves when he discovered that the presence of an object in an electromagnetic field altered the frequency reproduced by the device. His interest in the arts led him to use this to create music.
León Theremin’s discovery served to develop a number of inventions, but the key laid in the way the theremin worked. Sound is produced when something vibrates. With a theremin, this vibration is produced by an electric current generated by the instrument by means of a complex system of valves and coils. This electric current creates an electromagnetic field which is interfered with by the musician’s hands by placing them close to the antennas, controlling the oscillations of the current and creating sound waves. The current produced is at a frequency beyond the range of the human ear and therefore this piece of equipment also mixes two currents to change the frequency and make it audible. The music flows from the instrument without the hands of the musician ever touching it. Theremin approached his invention, placed his hands around its two antennas and the music began to sound. It seemed like magic.
In 1922, Theremin presented the instrument to Lenin. The leader of the Soviet Union was so impressed that he sent him off on a European tour to demonstrate the genius of Russian inventors. As part of the tour, Theremin played his instrument in iconic venues such as the Albert Hall in London and the Opera in Paris.

Years later, in 1928, the People’s Commissariat for Education sent him to the United States. He lived there for nine years, set up a company and a laboratory in New York, patented the theremin and played in some of the country’s leading venues. It was there he met Clara Rockmore, who became the first female theremin soloist. Much speculation surrounds his time in the United States and even more on the subject of his mysterious disappearance in 1937. It is said that he was a spy, that he returned to Russia to help his country in the upcoming war, that he was kidnapped by the KGB, and so on. The truth is that when he arrived back in the Soviet Union he was sent to a gulag in Siberia and then to a work camp in Omsk and later still to Moscow, where he was made to do forced labour in a laboratory until 1947.
He re-emerged in 1964, when he was freed. He then began work at the department for acoustic research and recording at the Moscow Conservatory and from 1971 he did the same at the Lomonosov University. He devoted himself to research for the last 20 years of his life. He died in Moscow in 1993. 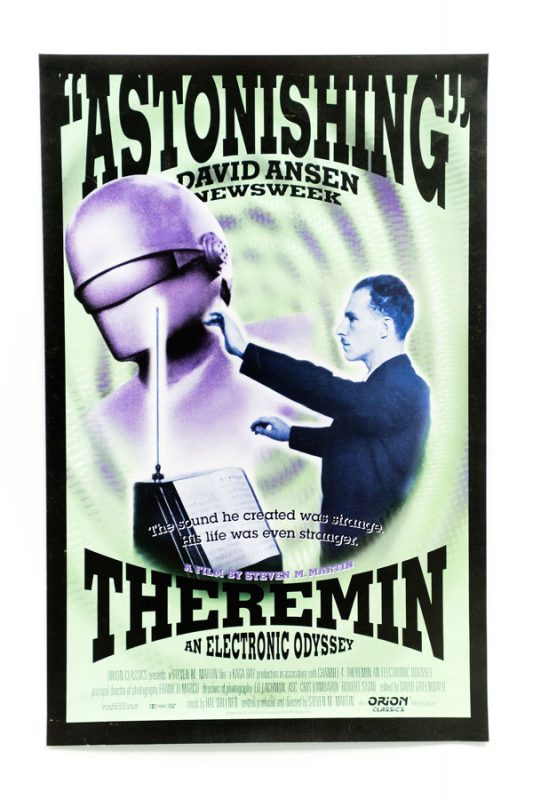 Theremin was researching the detection of motion when he invented his musical instrument. The company he founded in the United States, Teletouch Corp used this technology to develop alarms that were employed in various US prisons. He also created a closed circuit colour television to monitor his laboratories.
León Theremin also invented the passive microphone. This was an almost undetectable listening device that was activated remotely without the need for an electronic system. The invention was used by the Soviet Union to spy on the United States.
In August 1945, some children from a Moscow school presented the United States ambassador in the city with a shield bearing the American eagle carved in wood. The ambassador hung it in his office where it stayed until 1952, when the State Department discovered, quite by chance, the hidden microphone inside. The United States kept the discovery secret until 1960, the year that it was taken to the United Nations in response to a charge of espionage by Russia against the United States.
Whatever the case, his real passion was music. He invented variations on the theremin, such as the theremin cello or the ‘rhythmicon’, which was considered to be the world’s first drum machine. He also invented the Terpsitone, a variety of theremin that was activated by the movement of the whole body.

The theremin in popular culture

The theremin has been very present in the music of recent decades. Gary Numan, Radiohead, Alice Cooper, The Rolling Stones, The Beach Boys, Kitaro, Blur, Marillion, Cyndi Lauper, Simon & Garfunkel, Elvis Costello, King Crimson, Talking Heads, Led Zeppelin, Marilyn Manson, Nine Inch Nails, Pink Floyd, Rita Lee, Spice Girls, Uriah Heep, Spanish bands like La Oreja de Van Gogh and Argentinian groups such as Los Súper Ratones and Babasónicos have used the theremin for studio work and during live performances.
It has also had a presence in the cinema and on television. The first science fiction film soundtracks took advantage of its electronic and almost futuristic sound. The first person to use the theremin in a film was Billy Wilder in The Lost Weekend, which premiered in March 1945, although just a few months later the genius of suspense, Alfred Hitchcock, also used its distinctive sound for the film Spellbound.In both cases the composer Miklós Rózsa was responsible for the soundtrack. The theremin is also used in films such as It Came from Outer Space, The Thing, The Ten Commandments, Ed Wood, Batman Forever and Mars Attacks! It has also appeared in television series like The Simpsons, The Big Bang Theory and American Horror Story.